Brian Viglione is the drummer for the band Scarlet Sails, known also for his work with the Dresden Dolls, the Violent Femmes and Nine Inch Nails. A multi-instrumentalist, songwriter and producer, Brian has often aligned himself with groups who incorporate eclectic musical styles and theatrical elements. In addition to his various recording and touring work, he also gives drumming workshops to help participants develop personal creativity on the instrument and has lectured at Harvard University, RISD, The Boston Day and Evening Academy and other schools around the northeastern U.S. 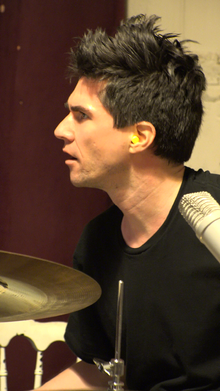 In Part II of this interview, Brian dove deep into the art of building a fan base and putting together a robust crowdfunding campaign. He also offered some advice to artists looking to find opportunities that are in line with their creative vision.

I’ve watched a lot of fan funding campaigns and contributed to them. And what strikes me is that to be successful at them you really have to be a true leader and be extraordinarily hungry. What was the experience like for you?

It was really intimidating at first, and Olya had to twist my arm a little bit. She kept saying, “No, trust me. This is going be a good thing.” I was a little freaked out by it because I had one Kickstarter experience in 2011 with a Berlin-based band called Gentelmen and the Assassins. We raised $6,000 to get the money for a tour together over there. But we had no record or any music out. It took us 30 days just to get to $6,000. But with this, Olya had a vision. She set a goal of $14,000, and we went from there.

We also live with two people who just started a company called The Void Academy, a community building and a crowdfunding resource center and educational forum for performance artists, musicians and visual artists that helps them build sustainable careers. They gave us immeasurable help refining our Kickstarter plan and 30-day outreach plan. They also helped us with the content we put out and to streamline the whole thing.

Basically, we had a road map in place and figured out our opening statement. Then we had a plan for what we would do at the one-week point, the halfway point and in the days before the campaign was going to end. We had an idea of how to flesh out and color in all the spaces between with content. We ended up hitting our $14,000 goal with over a week to go.

Then it became about the challenge of coming up with stretch goals that were in line with the rest of the campaign, which acted as a pre-order for the new record. Rather than get into esoteric rewards like, “We’ll make you pay for unicorns,” everything was centered around ordering the vinyl, the CDs and the accompanying artwork for the release.

We extended it to help us pay for the tour and promotion of the album. We now have two more videos we are able to fund. And we were able to print up a limited edition t-shirt for the fans. People just ate it up every step of the way and were super supportive. We even had two people buy the $2,500 house show reward, which meant we were able to travel and book other shows. The house parties really got our community fired up, and now we are able to build off that momentum.

How many of the people who supported the Kickstarter were in the folds to begin with? Was there a greater marketing play other than just activating existing fans.

I would say that the split between new fans and existing fans was about 50/50.

We made roughly $10,000 on our own through our own social media and mailing list. That was just $4,000 of the actual goal. Then we put out the Dresden Dolls mailer with a very direct call to action appealing to my fans who continue to be interested in what I’ve been up to but hadn’t necessarily seen the posts on Twitter, Instagram or Facebook. That was when we met the $14,000 goal.

At the end of everything, we made over $27,000. There was a relatively small amount of people that discovered us purely from the Kickstarter page, but I think that about two-thirds came from our own fan base. We also put out a few ads in Huffington Post and as part of our debut single premiere for “Boy You’re Wrong.”

That being said, a lot of the funding came from our own fan base or fans of mine from my Dresden Dolls days.

So, you put together a healthy, independent budget and then planned a rollout. How was the experience of putting together a record as part of a fan-funding campaign vs. putting out one through more traditional means?

Well, it was really exciting. One of the main things that I wanted to do with the savings I had earned from playing with the Violent Femmes was invest it in this band. I knew I didn’t want to just write it out. So, we basically were able to spend about $22,000 on the part of the Scarlet Sails album that included studio time, the mixing the mastering and paying everyone else involved in the recording process.

Right, so then we spent an additional $7,000 manufacturing the 1,000 CDs and 500 double vinyls, so, that makes roughly $29,000 total spent. That was money we had in the bank, and then we made $27,000 on the Kickstarter, which is great, because now we have the videos, the PR and the touring expenses coming up in the spring.

Knowing there is money to do what we need to do makes it way less nerve wracking, which is nice because doing a Kickstarter is always tense and exhausting. As an artist, you have to monitor all your pages and all the fan responses and be quick enough on your feet that you keep people’s attention and keep the campaign interesting and keep engaging your fans. But we were, I think, very fortunate in the team that we brought together to record the album.

We recorded it at Atlantic Sound Studio and worked with the engineer Diko Shoturma. We had 12 days there and got a tremendous amount done. And then we worked with a mixing engineer named Nic Hard who won a Grammy for his work with Snarky Puppy. He was great.

That part of the process was incredibly efficient. What we’ve been able to do now with the Kickstarter money is invest it in two things. First, putting together collaborators for videos – artists that we’re really excited to work with. For example, we’ve hired a body painter named Trina Merry, who’s done fantastic work. I met her through the Dresden Dolls years ago.

Our video director is a woman named Katya Valenskia, who’s just a phenomenal photographer. We’re also shooting another one on June 3rd, which anybody who donated to the Kickstarter campaign can come to. The theme is “Partygoers through Time.” We’re encouraging people to come in costumes. It will be a big dance party in this five-floor house that we live in here in Manhattan. There will be a rooftop jam at the end. I think that’s a really exciting thing for fans to be a part of.

In the end, it’s about how we use the money that we generated from Kickstarter to build on the band’s whole vision of what we want to put out there visually and musically and the collaborations we’re involved in. It’s also about finding fun ways for our fans to stay involved with the band.

The overarching theme for your career seems to be that you’ve made it a point to surround yourself with creative artists whose work you enjoy. I think a lot of people share that goal, but I don’t think people necessarily achieve it or are able to make a living at it.

You have obviously worked very hard at your craft, but your marketing has been rooted in the joy you’ve found in other creative people and putting them into your orbit.

That’s an absolute perfect way to sum it up. The one main thing I can say has aided me is a deep commitment to what I know I want to associate myself with and the joy I know I can derive from that experience.

I think people get derailed when they start questioning the validity of their own intuition. As an artist, when you start to question whether or not your own happiness is worth pursuing in lieu of a bigger paycheck or a steadier gig or something similar, then you begin to compromise other elements. That leads to getting frustrated and giving up.

I had a moment in 2012 where I just said, “I’m done. I’m clearly on the wrong path.” Things were not panning out, and my main frustration was that I felt I couldn’t find people who were as willing to commit to doing the work and commit to doing all the necessary things that being in a band requires from a person. I was met with a half-hearted attitude from people in a lot of the bands I was associating with, and it was driving me insane. My standards were high, because I had just come from working in the Dresden Dolls with someone who was completely committed. I thought that anyone who was crazy enough to be in a band for a job would be committed to doing it. Why else would you waste your time and energy, blood, sweat and tears?

But when I got out into the world, I saw that one of the big things that made me different was this driving commitment to do what I wanted to do and not sacrifice along the way. When you’re in music, there are many points in your career when you have to be willing to cut your losses and move on or pull yourself up by the bootstraps and do a lot of hard work that’s required. The payoff is just worth more than words can describe – that feeling of riding the wave of the band that you worked so hard for when it’s really succeeding and embodying everything you love to do. That feeling is the dream you imagine in your head as a kid that makes it all worthwhile – when you look out from the stage, and there are thousands of people in front of you enjoying the music that you’re playing … when you walk off the stage in a sweaty mess and think, “I just had the best time of my life!”

Do you have any advice for artists when it comes to finding that feeling and that success for themselves?

There’s no magic spell for getting there. When it comes to my own experience, I just know that I have a strong dedication to the kind of people and music I want to be around and to the kind of feeling I want to create.

You also need to have a really clear vision of who you are, what you want to do, what you know you can give to a situation and where you would like to see that go. The more clearly you have all that articulated, the more it helps you in your day-to-day steps of getting work done and moving forward with a project.

To learn more about Brian Viglione and his current project, Scarlet Sails, visit the band’s website. You can also check them out on Facebook and Instagram. Check out Part I of this interview, “Being a Versatile Musician,” here.