Why are we posting this in August? Because it’s time to get your holiday release(s) together now!

This post was first published in December 2012. It updated to fit the current industry.

The following article is a guest post by Cameron Mizell, a professional musician based in New York who is involved in a wide variety of musical projects. He has released many of his own albums independently. Cameron’s experiences as a musician and former record label employee give him a unique perspective on the music industry. 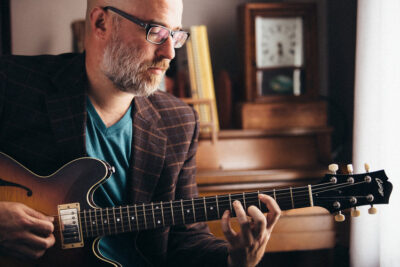 In 2007, shortly after the advent of Apple’s iTunes and the growing market of digital distribution platforms for independent musicians, some friends and I decided to make a Christmas album. We were just a few twenty-somethings trying to pay our bills as musicians, and realized that popular Christmas recordings sell, and now stream, year after year. What is it that sends people back to these classic recordings, and could we possibly create an album that people would want to listen to every holiday season? Our goal was to make a little extra money to help us with holiday expenses.

We surveyed the landscape of Christmas favorites to see what was missing. Once we landed on a style that suited both our abilities as musicians and our DIY recording setup, we began arranging Christmas songs. We weren’t a band, exactly, and we didn’t want to release the album under our names, so we made up a pseudonym.

Our first Christmas album did quite well, so the next year we did it again, under a different pseudonym—I like to think of each of these pseudonyms as a different brand. Within a few years I released four Christmas albums under three brands: Montgomery Bruce, Dunham Van Durham, and Be Still. People listen to our Christmas music every year, and while streaming doesn’t produce the same Christmas bonus as digital downloads, it’s still nice to see our work continually become a part of people’s holiday soundtrack.

A few years ago I wrote about this on a site I was running called MusicianWages.com in a post called “Make Yourself a Merry Little Christmas Album.” Looking back, there are a few things to add. So for MusicConsultant.com, here are some additional considerations when you set out to make a Christmas album.

While most of us don’t start listening to Christmas music until after Thanksgiving, record labels tend to release their holiday albums in late October or early November. If you want to follow suit, you’ll need to create a production schedule by working backwards. Here are some things to think about:

Chances are you’ll start recording in the summer while nobody else is dreaming of a white Christmas. Buy some Santa hats and break out the holly to get yourself in the spirit. Have some fun. The earlier you start the better the result.

Don’t Blow It Off

Christmas music sells well because people are always looking for something new, but with the familiar seasonal vibe. It’s also a time of the year people are willing to spend money. But don’t get greedy and think you can throw together some holiday recordings and call it an album!

Just because you’re making a holiday album and might not be releasing it under your own name doesn’t mean you shouldn’t put the same effort into it as you would your own music. The hard part is already done–lyrics and melody. Everything else is basically a clean slate. Use this as a chance to experiment and try things you might never do with your own music.

Releasing a holiday album is a great way to make some extra revenue from music, but you won’t make much money if you spend a lot up front.

Every time I made a Christmas album I viewed it as a challenge to work within my resources. I didn’t have access to a good drum room, so we just didn’t use drums.  I arranged the music to be played on the instruments available.  I spent a little extra time on mic placement and performing with good tone instead of laboring over fancy mics, plugins, and editing.

Write Your Own Holiday Song

Another way to avoid paying royalties is to write your own Christmas song. A well written holiday song could always generate extra publishing revenue in ways cover songs cannot.

When Lauren Zettler and I were recording a Christmas album as Be Still, I remember adding a harmonium part to a backwards guitar track and thinking, “Yeah, that sounds like snow.” Lauren turned around and started writing this nostalgic song about Christmas time of the same name. The thing about it, much like Joni Mitchell’s “River” (which we also recorded), is that it’s really a love song that takes place during the season, not another Jingle Bells. “Sounds Like Snow” has been one of the best-sellers on Be Still’s Christmas album.

If people enjoy the sound and feel of your Christmas music, there’s a very good possibility they’ll also enjoy original music in the same style.

Finally, here’s another tip:  This approach works for non-holiday music as well. Be creative!