The interview below was originally published in September 2009 but the advice is evergreen.  Most recently Tim Latham mixed the Grammy Award winning, multiple Tony award winning Original Cast album for Hamilton the musical and the Hamilton mixtapes.

Tim Latham is a Grammy award winning producer, engineer and Mixer.  He has worked with Lou Reed, Brittney Spears, the Black Eyed Peas, De La Soul, A Tribe Called Quest, the Fun Loving Criminals and countless other artists.  He has been doing mostly mixing projects of late and was kind enough to take some time to speak to me after a overseeing the mastering of one of his latest projects while at Sterling Sound. 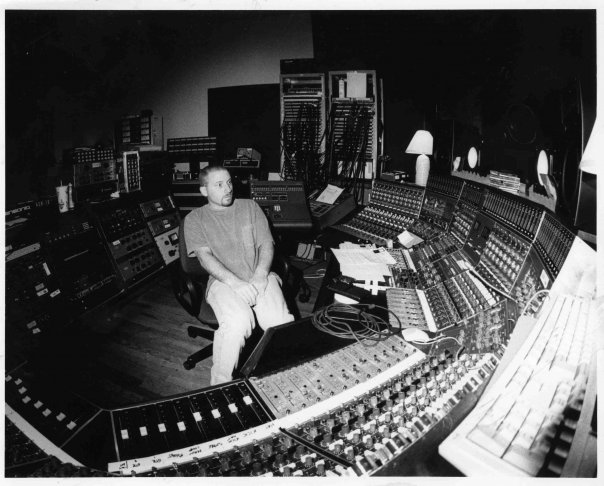 Tim thanks again for your time.  As someone who has been in the business as long as you have been I was hoping you could tell me what you wish more artists would do before asking you to mix a record and then hopefully find out a bit more about how you have built the career you have today.

TL: Well, for recording purposes, hire an engineer.  Always.  Don’t let your friend who knows how to use Pro Tools be the engineer.  You can find someone in engineering school for $20 an hour, even on a budget.  It is money wisely-spent even if it’s going to be recorded on an M Box. You need a set of ears there.

You get a lot of files that are poorly recorded?

TL: Often everything needs to be replaced, and I have to re-do the drums.  Any beginning band should spend money making their demo or record- it’s worth it.

Did you start out as an artist?

TL: I started off as an engineer and gopher.

What was it that got you sitting in front of the board eventually?

TL: I have no idea.  You make your luck and create your breaks.  It’s just a matter of how you take advantage of them when you get there.

You were at Battery when you started doing records?

I first started working in the studio in 1986 in Boston as a gopher guy.  I didn’t know anything about anything. While I going to school, I was engineering in the studios trying to figure out what I was going to do.  I graduated knowing that I know nothing, which I think was my greatest strength – being aware of how little I knew.

So how are you sourcing new clients lately?  In your situation I am guessing the records you have made are like business cards?

TL: It is tight right now. It’s tough for everyone.  I am relying on long-term clients and the other producers I’ve worked with for years.  For all of us, the bulk of what we do – all our records are business cards.  Most of my clients now are international.

TL: I’m about 95% mixing.  I have no interest in production.  We did a couple records with Fun Loving Criminals and now, I feel like you kind of set yourself up wearing every hat like that, if you’re a producer, engineer and mixer.  If there’s something wrong with the record, there’s only one guy to blame.  The engineer can blame the producer or the producer can blame the mixer, but when you’re wearing all three hats, if the record doesn’t sell, it’s your fault and you’ve got a Scarlet Letter.  It’s very taxing.  It’s a left brain/right brain struggle.

What is your advice before getting into the studio?  How much pre-production do you recommend a band do before working on their record?

TL: As much as you can possibly get away with.  I’ve seen more time wasted in the studio.  The majority of time – about 80% — I spent in the studio was a waste of time.  I’ve seen having pre-production meetings in the studio, bands not having their crap together before they get there, sometimes they get overwhelmed by being in the studio for the first time, which is understandable, but you need to make practice runs.  Go to the local studio first. Be prepared.

TL: I think they can speak the language.  Sometimes it’s actually more hurtful than helpful.  A little knowledge in the wrong hands is dangerous.  You just get questions every step of the way. I’ve been doing it for 23 or 24 years, and this person has had a home studio for a week.

TL: Listen to your favorite records, even older records.  Listen to your mom and dad’s records.  If there’s something about those records you like – you may not even be able to articulate what it is – but you like those records.  That’s how I thought as an engineer.  I listened to records that I liked and asked myself, “How on earth did this record come together like that?”  It’s not just about the songs, it’s the record itself.  That’s what really piqued my interest in it.  You can draw from all of those, but listen to the bands you kind of sound like.  It’s kind of that easy.  Don’t go with the first choice or the guys who sold the most records.  Go with the records you like the most.

I also have A&R people just come out and say, “My God, the records that you worked on sold so many records.”  I could sit here and try to take credit for that, but it’s impossible.  I mean, I had something to do with it, because it wouldn’t be the same record if I did not work on it.  The songs would be the same, and the artists would still be the same but it still wouldn’t be the same record.  But to say I’m responsible for this record selling X number of records is just ridiculous.

I take what I do very seriously, but I don’t take myself too seriously.  Coming up assisting and interning, seeing miserable heaps, I wondered who would possibly want to spend all this money being around a miserable heap like this?  I said, “This is ridiculous.  You’re getting invited into people’s dreams and you’re a miserable heap.”  I wouldn’t want to sit next to some of them on a bus.  If you become a good “knob jockey,” what separates you is how you get along with people.

Do you have a Web site?

Do you have any general artist advice?  Are there other mistakes you’re still seeing?

TL: I don’t want to sound corny, but it is the new frontier.  The old way doesn’t fit anymore.  The mistakes people make are not knowing their inabilities and not having the right people around them to steer them in the right direction.  I’ve seen plenty of times where younger bands have a best friend’s friend that has a business degree and is going to be their manager without having any clue as to how the music industry works.  And he’s just making mistake after mistake after mistake.  And I’m not saying that going with one of the larger management firms is by any means exponentially better, but it’s definitely better than having somebody who is completely inexperienced with the industry.

If you’re not properly represented, nobody will ever take you seriously, or even if they do take YOU seriously and they take the music seriously, if you have somebody who is representing you who is an inexperienced person, you’ll never get over the hurdle.  The money is harder to get to.  The people who are easy to deal with are the ones that are going to get the money, the contacts and get their music placed in a movie, music, in advertising or in a video game. If you are being represented by someone who has zero you are making it really difficult on yourself.
———-
If you need your record mixed, you can contact Tim Latham on his website http://protools-mixing.com/