This interview was originally published in July, 2014.

David Dufresne is the CEO of Bandzoogle, a platform used by more than 20,000 musicians worldwide that helps artists and bands build and update their own music websites. David grew up as a self-proclaimed “music geek,” had his own radio show in college and DJ’ed in clubs throughout Montreal. After earning a master’s degree in management with a focus on venture capital, he worked for several firms throughout Canada that focused on software companies and mobile applications in the early days of the App Store. David joined the Bandzoogle team in 2011 when the company’s founder Chris Vinson decided he needed a partner to lead the Bandzoogle’s marketing and business development strategies. 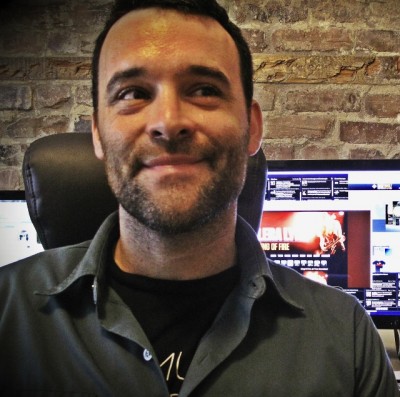 I talked to David about the history of Bandzoogle and the important details artists commonly overlook when building their own websites. He also shared some information about how Bandzoogle helps artists share their music and make more sales.

Thanks so much for taking some time to talk to me, David. Tell me a little bit about how Bandzoogle got started.

The founder of Bandzoogle is Chris Vinson, who is now our Chief Technology Officer (CTO). We’re turning 10-years old later this summer, so it’s been that long since he started the company. Before launching Bandzoogle, he was playing in a band and built them a website that helped get them signed by Aquarius Records here in Canada. They made an album and toured. When the band broke up in the early 2000s, Aquarius hired Chris as a webmaster for all their acts on the label and all their sub labels. While he was there, he built a console so that artists could go and add new songs, photos and tour dates to their websites themselves.

A bunch of people started asking him if they could use the console for their own indie bands and side projects. That’s how he got the idea to launch Bandzoogle. His boss gave him a small loan, and he built it and ran it totally by himself at first. He slowly started gaining new users and eventually added employees one at a time. I joined up four years ago as CEO, and Chris moved over to the CTO position, where he now handles the product and development team. I help expand the business side of the company and help with marketing and business development strategy. One of my best moves was to hire Dave Cool as the Director of Artist Relations as well as a blogger and community manager.

Since I started at Bandzoogle, we’ve more than doubled in size both in terms of paying users and in terms of employees. We’re an independent company, so we grow organically based on our profits. That means we’re not at the mercy of board members or investors who would force us to change our business model to something less beneficial to artists.

And what about your background? I’m guessing you didn’t just graduate from high school and immediately become a CEO.

I’m one of the very few members of the Bandzoogle team who is not a musician. I grew up a huge music geek and had a radio show at university and DJ’ed in clubs when I first moved to Montreal. Then I actually got into venture capital. I did my master’s degree in management and my thesis in venture capital. I joined a firm as an analyst and worked my way up through the company over the course of eight years. I ended up moving to a different firm based in Toronto where we invested in software companies and a lot of mobile application companies in the early days of the App Store.

At that point, I decided I wanted to launch my own startup based on crowdfunding and music. Of course, five years ago, that was still a novel idea. When I was working on that project, I met Chris hoping to convince him to partner up. After a few meetings, we realized he was a technical guy looking for a business partner, and I was a business guy looking for a technical partner. We decided to work together.

I’m guessing that, as someone who has worked in venture capital and also with tech and music companies, you’ve gotten to know artists websites fairly well. What are the common mistakes you see artists making with their websites?

The biggest mistake is not having one. For bands or artists that have a website, I’d say that a common mistake is not having control over their own website. When we go to conferences or do our Website Demolition Derby panels, a lot of artists will say, “I had a guy that made this for me. I know it’s outdated, but it’s hard to update, because I can’t update it myself.” I think, as a musician, you must be able to update your own website yourself as many times a day as you want. And as another part of that is, you should also be able to update the site’s organization. You should be able to add a page, add features or change your design whenever you want.

Basically, too many artists give up control of their website. They either give it to an old friend or their second cousin’s son … and they end up with a static website that quickly gets outdated because they rarely update it.

The Bandzoogle platform allows for great customization of website layout and functionality. What are some mistakes people make with their website layout?

A mistake I see often is artists either having too many pages and sections, or not enough. The first thing you should do is have really clear navigation and a clearly-laid-out menu on your website. Your website needs to be well organized into sections that each play a very specific role. For example, your bio page needs to have your bio and maybe some downloadable photos so bloggers and press can grab them easily. But you shouldn’t then put a video or information about tour dates in that section. The “Tour” section or the “Events” section should have those dates, and the music section should have videos. Too many people confuse their navigation by making pages that have too many pieces of information that are not related to each other, or they create too many subsections.

In terms of a site’s organization, simple and clear is the best.

And do you have an eCommerce feature?

We do have an eCommerce feature, and it keeps getting better and better. I think it’s important that those visiting your website are never more than one or two clicks away from buying something, downloading something or signing up for the mailing list. Many artists still only have links to iTunes or Amazon on their websites, which you probably should have. But you have to keep in mind that when fans buy your music on iTunes, iTunes keeps 30% of the profits, and your distributor also keeps a percentage. And even worse than that, in my opinion, is that you have no idea who bought your music.

If you set up a store through your Bandzoogle website, you get to keep 100% of your sale, which is great, since most of our competitors actually take 10 percent or more. You end up keeping more of your money, but you also know who what bought what from you. You can give them the option of signing up to your mailing list so you can contact them again when you have new material available.

One of the cool things about our eCommerce feature is that we don’t take a cut of your sales. We also have features that let you sell digital music and set the price for each track or album. I’m seeing artists having a lot of success with the “name your own price” model; they’re noticing that their fans are willing to give generously. You can also give away some tracks for free.

We also have a physical product store feature that we recently linked to the digital aspect. So, if someone buys a CD from you, they also get the digital download.

And we recently added a feature that lets you sell any digital file. So, you can sell products like eBooks and PDFs of sheet music, video of live performances or instructional videos.

Have you you crunched the numbers on how well these different website features are working for artists? Are there any trends you can point to such as sales, YouTube plays, plays of individual tracks, etc.?

It’s hard to get hard data and statistics like that on the Bandzoogle platform, because we do have a significant number of our users that might use different music players. It’s difficult to track plays when people are using SoundCloud or some other platform and embedding them on their website. They also might be using Bandcamp or something different for eCommerce. However, we do have over 20,000 users.

We’re launching a new website in the next few weeks. But on our current website, if you go to the “Features” section and the “Sell Music & Merch” subsection, you can see a running counter of artists’ total sales figures. We’re quickly approaching $14 million right now, which is pretty cool, because that represents all sales artists are doing through the websites they have with us. That doesn’t even take into account sales musicians might be making through other eCommerce platforms. And, again, they get to keep 100% of sales they make directly through us.

If you divide that by the number of users we have, it’s not that impressive, but it’s reassuring to see that people are still paying for music or merch directly from artists. Last time I checked, the average transaction was $26, which is great. That means people are buying more than one album or an album and a t-shirt or some combination of products.

That’s definitely great news, if that’s what’s going in the cart every time.

I totally agree that it’s important for artists to take control of their own website. What type of artists get the most benefit from Bandzoogle? What do you offer artists that other platforms like WordPress, Squarespace, etc. might not?

Bandzoogle is perfect for all types of musicians because it’s made by musicians specifically for musicians. The way we differentiate ourselves is through our core focus, which is building options and features for bands and musicians. This means both that Bandzoogle is more of an all-in-one solution. You’ll get your music players, video players, blogging platform, photo galleries, mailing list management and store all in one. You don’t have to fool around with adding plug-ins or widgets or paying for different services. It ends up being really economical, because our packages are all-inclusive with no hidden fees. They include all the bandwidth you need, storage, domain name (if you need it), analytics, email inboxes, etc. We also have online support seven days a week. And 90% of musicians are not extremely tech savvy. They don’t know their way around WordPress themes, finding their own hosting, etc., so Bandzoogle is both easy and powerful. We’re currently working on a new control panel that will be based in WYSIWYG. I’m hoping in a month or two that will be built into the platform.

Bandzoogle keeps improving its system based on user requests and suggestions. It’s an easy, powerful way to get a pro website. And there’s a free trial, so there’s really no risk to check it out.

We also have an ebook available with advice for building music websites that is Bandzoogle agnostic called Building Your Website: A Step-by-Step Guide for Bands and Musicians. And Dave Cool also just wrote a blog post recently featuring a 16-point checklist of all the things you should incorporate into your band website.

To learn more about David Dufresne and the work he does with artists, visit the Bandzoogle website. You can also stay up to date with all the company’s latest developments on Twitter.