Those of you who have been reading this blog for a long time may remember my 2010 interview with Tom Silverman that wound up being picked up by several larger periodicals.  Tom is the founder of TommyBoy records and one of the principal executives at the New Music Seminar.  He asked me to re-post one of his latest blog posts about where the music business is just over two years later.  I personally feel it’s premature to call the upward swings in some areas of the business a “resurrection” but I have enormous respect for what Tom built at TommyBoy and the work he continues to do with the New Music Seminar.  If nothing else, the statistics he presents below are very interesting.  The article below is unedited and written and compiled by Tom himself.

Let’s look at the good news.

In 2003, there were virtually no single sales as the labels stopped manufacturing them to drive buyers to higher priced albums to get the song they wanted.  In 2004, iTunes changed all that and for the first time music lovers could buy not only the radio single, but also every track on the album separately for only 99 cents. Digital singles exploded, soon surpassing total album sales, physical and digital combined. 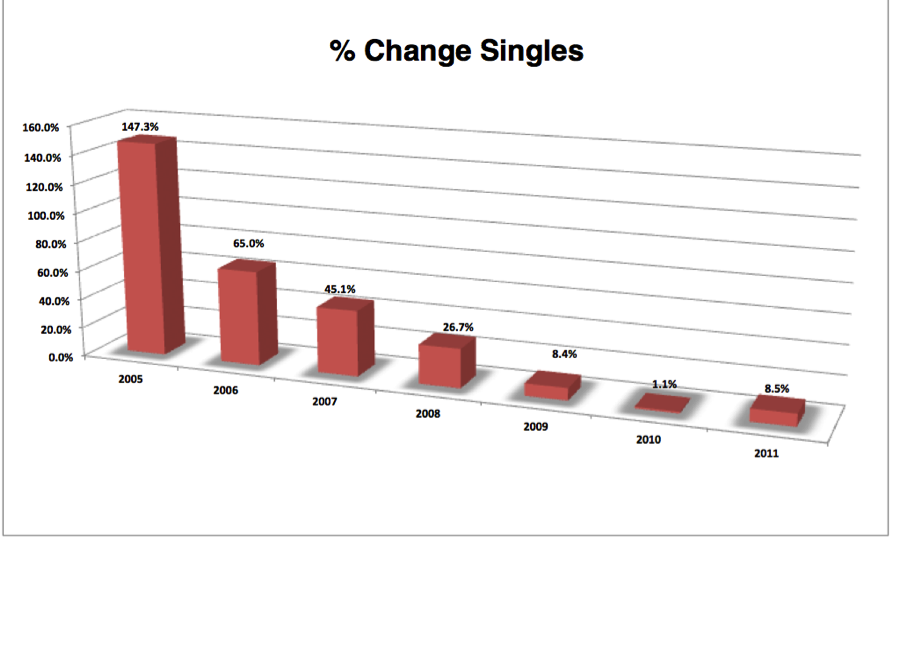 In 2010, digital single sales increased only 1.1% leading people to believe that tracks had peaked and might begin to decline.  2011 proved them wrong as singles grew 8.5%. Although this seems like a small number, due to the huge denominator, this represents growth of over 100 million singles in 2011. 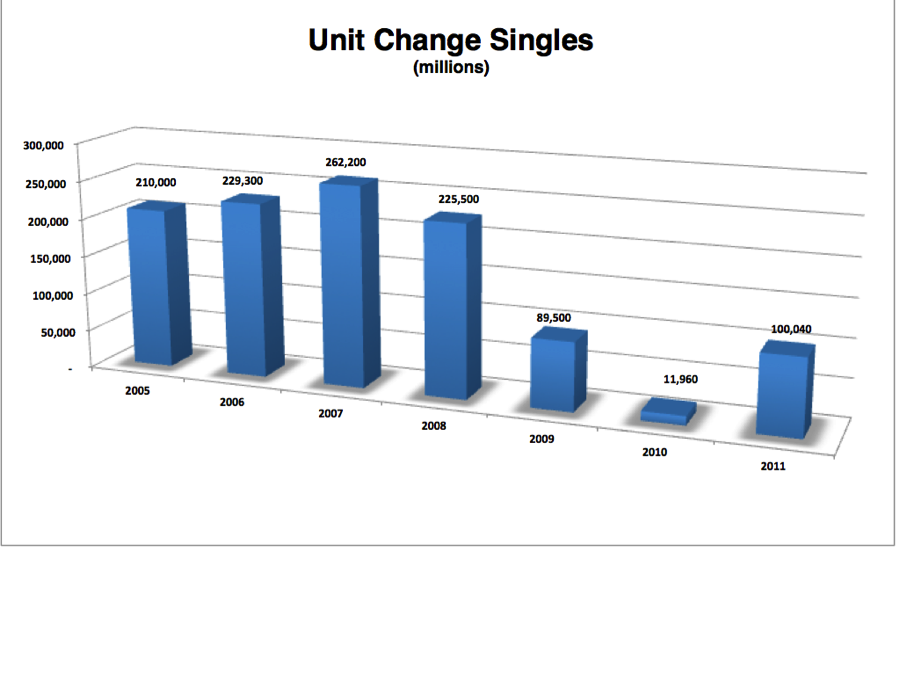 Most of the 1.27 billion tracks that sold in 2011 were at the higher $1.29 price point showing the inelasticity of demand for digital singles even in the face of free illegal downloads and a half a year of Spotify plus Rhapsody, Mog and Rdio offering streaming competition. It is important to note that this growth did not come from current hits like Adele, Katy Perry or LMFAO but across the board especially from catalog. 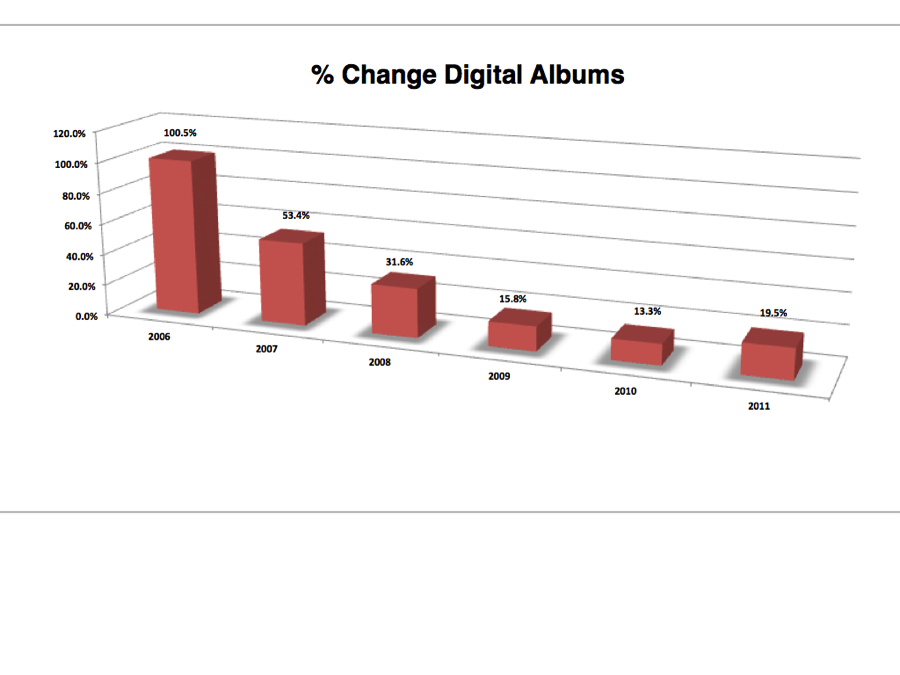 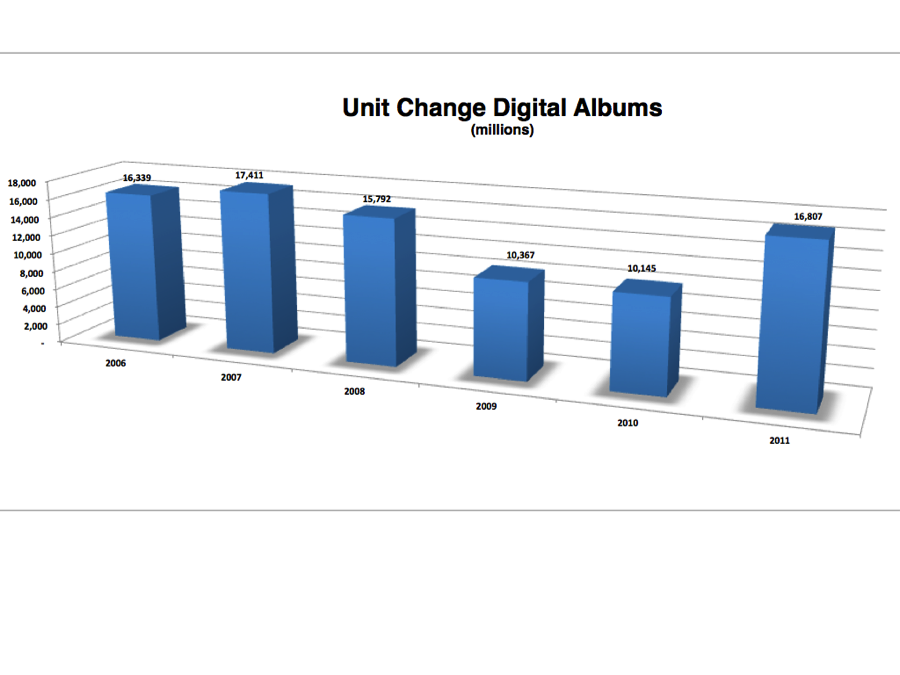 16.8 million more digital albums sold in 2011 than in 2010. 2011 was the first year that the increase in digital album sales exceeded the fall in CD sales. This is a significant benchmark that few seem to have noticed.

Good old CDs had quite an amazing year. In the face of the Borders chain closing and many other stores folding and CD SKUs shrinking within existing stores, we saw the smallest percentage shrinkage in CD sales since 2001.

Physical CD sales on the internet were actually up 17.7% in 2011 indicating an increasing desire for CDs at least online. With CD sales still running almost 69% of all album sales seven years into the iTunes era, it is clear that people still want physical CDs. If it were easier for record buyers to find the CDs they want in stores, there is no doubt that CD sales would be selling in far greater quantity. 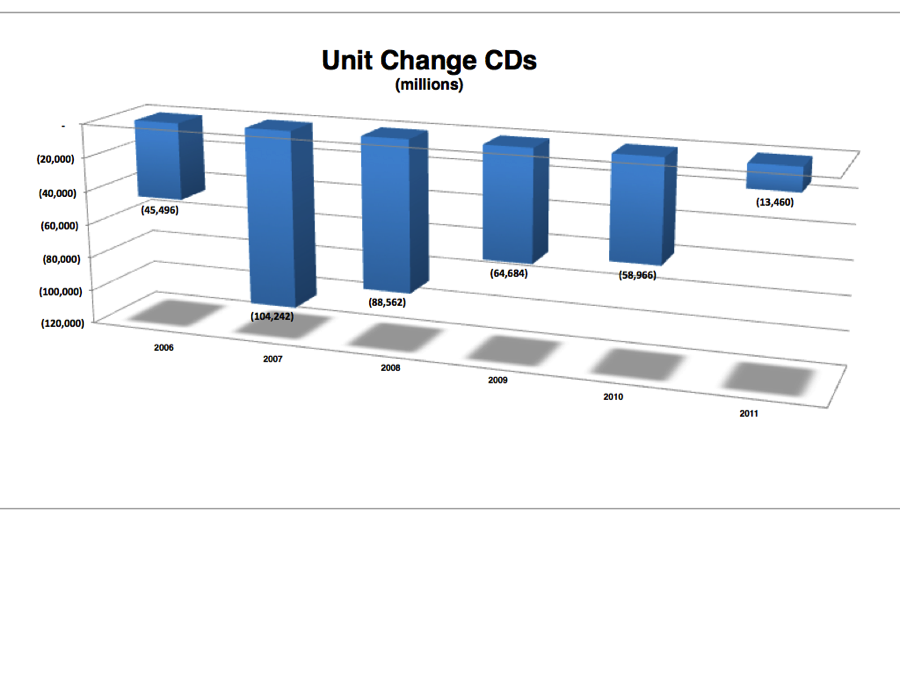 After hearing stories of the death of music acquisition from the “cloud camp,” music buying seems alive and well in all its forms.  Nielsen SoundScan counted 1.6 billion music transactions for the first time ever in 2011.

If the good news in music sales is not enough of an indication of the returning health of the music business, add to that the new revenue centers of music streaming.  In digital broadcasting where SoundExchange collects and distributes to artists and labels statutory fees, the industry has seen an enormous growth in new revenues. 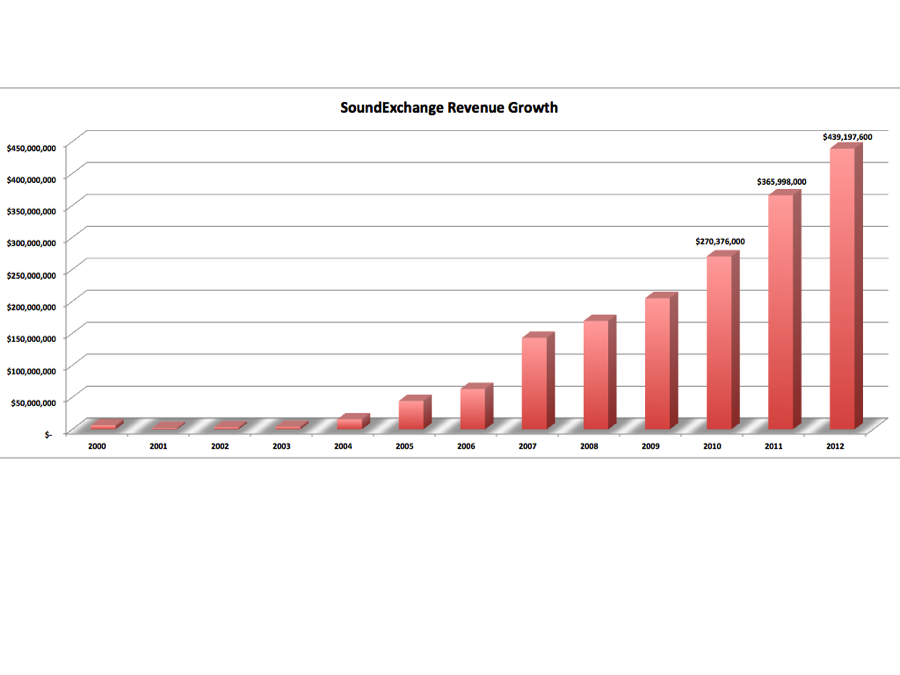 In 2011, $95 million more dollars were collected by SoundExchange than in 2010 and conservative projections for 2012 show growth into the mid $400 billion mark. In 2011, SoundExchange collected almost the same amount from digital broadcasters as the traditional performing rights societies collected from all of the AM and FM radio stations for the songwriters and music publishers.

Other licensed streaming services with subscription models like Spotify, Mog, Rhapsody, Rdio and other subscription services added even more new revenue to the music business. 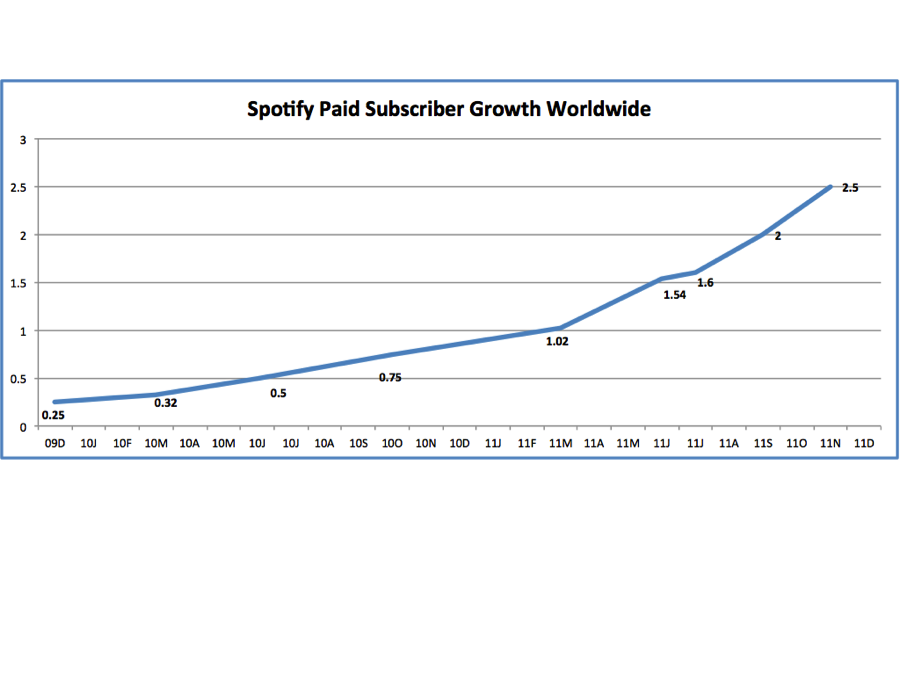 Although this graph tracks worldwide subscriber growth, Spotify’s U.S. launch in July shows great promise for significant new music revenues from the “access” model that appears to enhance rather than cannibalize music acquisition based on early results. This is comforting to a music industry that is always worried about a new format cannibalizing an older one.

The music business has clearly hit bottom and the resurrection is here.  After a decade of the “music web” expanding its reach, becoming easier, faster and more social, new music discovery channels are showing their impact in more music sales and more paid music access. To be fair, all the news was not positive in 2010.  The continued shrinkage of CD shelf space, the decline in mobile phone ringtone/ringback revenues and the failure of Beyond Oblivion, a promising idea tying connected devices to “feels like free” music access, were lowlights in an otherwise stellar year for the business of music.  The powerful launch of iHeartRadio, the long-awaited U.S.

launch and explosive growth of Spotify, the public offering of Pandora and their achievement of 120 million registered users, Sirius/XM reaching 21.9 million subscribers. Mog, Rhapsody, Rdio, Cricket/Muve all grew their music subscriber base, all not only driving more revenue to the business, but more engagement and discovery of music and spending especially in the over-30 demographic that had historically spends far less money on music than younger demographics.

YouTube and Vevo are beginning to generate significant revenues to the music business and also driving discovery and sales as well.  Mac Miller and Tyler the Creator were just two of the breakthrough YouTube driven hits proving YouTube’s ability to drive exposure as well as sales.

Smartphones reached 50% of all mobile phones in the U.S. and the recent CES Convention showed hundreds of new connected devices, and the rollout of connected automobiles all of which will drive more music access.

The 50’s saw the transition from 78’s to 33 rpm albums and 45 rpm singles that fueled a 30-growth period for music.  The cassette made music portable and stimulated additional growth.  The CD increased the perceived value of an album by 80% and ignited the biggest growth era in the history of the music business. A decade of adjustment is over and it is now clear that we are on the brink of the next big growth era of the music business.

On June 17-19, the New Music Seminar will explore the exciting future of the music business with the SoundExchange Digital Broadcasting Summit and the BMI Creative Conclave. The creative community and their label partners will meet the digital broadcasters, music bloggers, music technologists and all of the new music exposure and monetization players. Clear Channel CEO, Bob Pittman and Sean Parker will share their vision for the future as keynotes, as every sector of the evolving new music business convenes to discuss their perspectives for the exciting new future for the music business.

For most of us in the music business, this is probably the first time in a decade where we are feeling a new sense of optimism. Although unauthorized on-line music usage and distribution has not gone away, it is now time that the music industry begins to focus on expansion and positivity rather than fear and protectionism. Welcome to the resurrection. Have a nice day.

The Future of Music Summit 2013 Live